(This piece is cross-posted at my course site: modernist-magazines.org)

This post is a shorter version of what will eventually become a longer piece about digital methods for the analysis and teaching of modernist magazines. By way of background, the occasion for this post was a workshop I did this week with two joint sessions of my graduate course in modernism and digital humanities and Sean Latham’s graduate course in modernism and new media. Sean’s course is interested in the ways in which modernist literature (and this week, magazines) embody functionalities of 21st Century digital media (i.e. the “new” new media). They have been discussing Katherine N. Hayles’ concept of emergence, through an unpublished essay of Sean’s, “Unpacking My Digital Library: Programming Modernist Magazines,” forthcoming in Editing Modernisms in Canada, eds. Colin Hill and Dean Irvine.

Emergence describes “a particular kind of complexity that arises not from the individual elements of a system, but only from their interaction” (15). It emphasizes the interactive system of meaning that derives from the connections among various content items of a magazine, and only from those connections. In arriving at this sense of a dynamic readerly coherence, he uses Espen Aarseth’s concepts (from Cybertext ) of “texton,” a string of information that exists in the text (a poem, an advertisement, a headline, etc.), and “scripton,” their idiosyncratic assemblage by the reader.

Bound up in these concepts is the nature of magazine reading itself. Magazines are not codices. They are not books to be read serially from cover to cover (although a few of us 21st-Century denizens who study magazines might admit with blushed cheeks that we do).

So, our workshops looked at social network analysis and text mining as ways of potentially identifying, or at the very least of recording and analyzing, scriptons that might emerge in the magazines.

We picked the September 1918 issue of The Little Review at the Modernist Journals Project (MJP) because it features one of the few direct references to the First World War, W.B. Yeats’ poem “In Memory of Robert Gregory,” an Irish airman. It contains other items on the theme of death, including James Joyce’s “ULYSSES Episode VI,” later known as “Hades,” depicting the funeral of Paddy Dignam. However, there is a number of other items that deal with the themes related to death, such as two short stories by Sherwood Anderson and Ben Hecht, respectively titled “Senility” and “Decay,” and which immediately follow Joyce’s installment. Aside from these editorially juxtaposed pieces, however, are numerous items of criticism or correspondence that rail against literary obsolescence as a kind of death, if not in so many words. For instance, it emerged in our discussion that Edgar Jepson’s essay “The Western School” is talking about the deterioration of contemporary literary production in a way that is evocative of death and shares valences with the ways in which other pieces deal with death more explicitly. Most importantly, it was only through the comparison with the other pieces dealing with death — which appear later in the issue — that we were able to read it in concert with the emergence of death at all.

Timeline of Student-Curated Data from MJP

For our workshop, I prepared a dataset from information my students have culled from the MJP. These data derive from an interactive timeline project that my students in periodical studies have done in four different courses at three different universities. The students curate content in the MJP by entering items and their bibliographic data into a shared Google Docs spreadsheet. The bibliographic data include author, genre, page numbers, and publication date, the latter of which places the item on the timeline. More importantly, students assign topic tags to each item in order to provide a sense of its meaning. In the timeline, readers can click on an item to view a description and link to its location in the MJP. The timeline is additionally surrounded by filters from the data types (author, genre, magazine, topic tag) that allow the reader to refine further her exploration of the data. The idea is that codifying the metadata into the timeline will allow for discoveries and provoke questions as more and more content is entered. This is one possible technology for uncovering and articulating emergence within and across magazines.

Using some (carefully massaged) data from the timeline, I made some CSV files to feed to Gephi for the generation of network graphs. While the timeline interface separates connections in time, and therefore also in space, Gephi presents them in a 2D, timeless space so that all are apparent. In the interest of transparency, I also posthumously added the Death tag and some other ones that reflect our discussion from the first day. These include Greatness and Mediocrity (among others), since we noticed that Yeats’ poem takes pains to point out how much Gregory had in fact not accomplished relative to his more prolific peers. 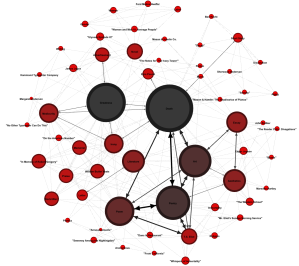 So, with these connections in mind, we get this bibliographic and thematic overview of the September 1918 Little Review. The image uses the Fruchterman Reingold layout algorithm (see here for information about Gephi layouts) to place the more highly connected nodes in the center, grouped by edge weight. That means the nodes that have more connections with each other will be in closer geographical proximity. One pattern that emerges is the relative distance of the genres Poem and Short Story. They appear on opposite sides of Death and, aside from that, have nothing in common thematically or in terms of contributors. In Gephi, one can mouse over a node in order to view its nearest neighbors (a degree separation of 1) in context of the larger graph (see here).

That effect becomes even more pronounced if we generate an ego network of Death, with the node sizes re-set for context, and mouse over different terms within it so as to highlight their immediate connections. The disparity between Poem and Short story becomes even more clear. In this picture, which shows the micronetwork that emerges when mousing over the Short Story node, we see that the Short Story genre has virtually nothing in common with any other content.

On the other hand, mousing over the Poem node reveals a much wider micronetwork that connects Yeats’ poem with several works by Eliot, Jepson’s Essay, and the triad of Greatness, Mediocrity, and Irony. Why would Margaret Anderson and Jane Heap apparently use the short stories to carve out a separate space for the lowly and dissolute? Is it part of a strategy to explore different aspects of death and dying, using generic properties to present different facets?

Interestingly, the Novel and Essay genres bear nothing in common with Short Story but have several connections with Poem, particularly in the topics of Greatness, Poetry, and Art, and in featuring Irony as a device. This graph shows what happens when we mouse over Novel. It would seem that the short stories in this issue are more straightforwardly realistic about death and dissolution than their longer form and poetic peers.

The isolation of the Short Story group is even more pronounced if we change to the Yifan Hu Proportional layout algorithm, which calculates centrality and repulsion in such a way that clusters become apparent while emphasizing the differences as outlying branches (see here for more information about Gephi layouts). The bottom portion of this image shows the two clusters of the Hecht and Anderson stories as they attach with Death, while the entire field bears no relationship with them. Likewise, Ford Madox Hueffer’s installment of Women and Men bears little relationship with the rest of the issue, constituting an outlying branch of the Novel node not connected with Death. Conversely, Joyce’s installment of Ulysses is quite well integrated with other memes in the issue, while Heuffer’s is the only literary piece not connected with Death.

It is interesting to note what else is not connected with Death. The advertisements at the back of the issue, one of them for a Hammond typewriter that emphasizes the Greatness of Literature, as if the tool could somehow make the buyer a great writer (“No Other Typewriter Can Do This”), but obviously without the Ironic representation of Mediocrity that characterizes much of the actual literary content. The ad for Mason & Hamlin, “The Stradivarius of Pianos,” also emphasizes Greatness as a selling point. In thinking about these relationships, the ads seem to represent the lack of Ironic insight into worthiness and Mediocrity that take front and center in Yeats’ poetic argument. While we can’t know what the editorial intent was in placing these objects together (or if there even was one), what we can be sure of is that a system which enables readers to tag content semantically can help to provoke new questions that might be worth going back to the magazines to investigate.

I raise the latter issue about advertisements because they constitute a part of the emergence of Death that was not discussed in class. It occurred to me as I was massaging the spreadsheet to feed to Gephi and thinking about the pieces we had read. This would be an example of how collaborative markup, say of a small working group of scholars or even one comprising all the members of our field, can aid in the discovery of emergences utilizing artifacts we might not individually have noticed or thought of as relevant. This would be a reactive and not so much a predictive method, one that utilizes both the stable bibliographic data as well as the idiosyncratic scriptons assembled by readers.

I would like to suggest, though, that a predictive method might be found in text mining. Using the Voyeur Tools for analyzing corpora, we can see the chronological surges in word frequency over the entire Little Review corpus in the MJP. A spike in word frequency in a given issue might mean that we are more likely to generate scriptons related to that word. As a brief example, see this Voyeur corpus of The Little Review from its beginning in 1914 through the Winter 1922 number (use the gear cogs to apply the Taporware stop word list, and be sure to make the change globally).

After applying the stopword list (and making a few other manual removals), this picture shows the raw frequency trends of the top five reoccurring words in the currently available segment of The Little Review. The word life has the top overall frequency in the corpus, but its usage declines precipitously with the start of the First World War. What does the trend look like for the word death, and is there a significant pattern around the September 1918 issue, as above, or perhaps at different key moments in the War? 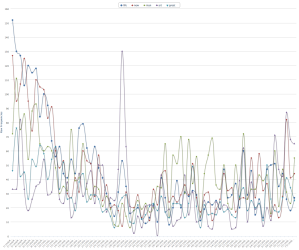 A much bigger, live version of this graph allows us to gain more information by mousing over and clicking. The word art has a massive and unique surge in Volume 3, number 8 (January 1917). The reason for it is that Jane Heap took over as content editor for that issue with a round of essays on art and aesthetics. Although a 3- or 4-issue arc of the run bears a higher focus upon art, the word (and the subject?) drop almost completely for a bit and then return to a normal pattern for the rest of the run, with some higher spikes later on. I will address this sort of method in more depth, looking specifically at how we can locate emergences in the issues to which the graph directs us.

2 responses to “Network Analysis, Text Mining, and Emergence in the September 1918 Little Review”