In part 1, I suggested that in order to really get a handle on The Egoist or even an article published in it, we should attend to the social nature of the magazine, which entails more than reading, for what the act of reading misses is some of the other work magazines do, namely, creating networks of authors, texts, media, readers, ideas, genres, and practices.  While we might no longer be able to appreciate the size and feel of the paper The New Freewoman was printed on when we look at it on-screen, the data that the Modernist Journals Project and similar sites generate in the process of digitizing magazines provide the raw materials for visualizing and analyzing components of magazines that cannot be immediately grasped by looking at a single issue but which are as material as the page layout of a magazine and as essential, if not more so, to defining a magazine’s character.  I am talking about the kinds of aggregate qualities Mark just ran through as well as networks of authors who appear together in the same issue and across many issues.  The big idea I’m exploring in my work these days is that it is out of these networks, created in the pages of magazines much as networks are made today on Twitter and Facebook, that people in the Teens, Twenties, and Thirties formed their ideas of what modernism was.

I am far from being the first person to talk about the significance of networks in modernism.  Indeed, network has become a favorite metaphor in literary studies of late, for the concept resonates with the discipline’s shift away from an author-centered literary criticism toward one interested in the collaborative and social contexts of production, circulation, and consumption.  Consider these passages:

¨Networks of artists and writers sympathetic to the aims of modern art formed in various parts of the world, whether on the Left Bank in Paris, around the British Museum in Bloomsbury in London, in Harlem or on Fifth Avenue in New York.”
–Pericles Lewis, Cambridge Introduction to Modernism
¨[Modernist] aesthetic activity [belongs] within a network of activities:  making, exhibiting, reading, debating, viewing, reviewing.”
–Michael Levenson, Modernism
¨In England, this outbreak of modernist experiment influenced a loosely interrelated network of groups and individuals, many of them based in London.”
–Norton Anthology of English Literature website

What you won’t find in these or the vast majority of works of criticism that claim modernism was a particularly networked phenomenon is any consideration of the actual networks of modernism, and you certainly won’t find any network analysis.  Too often, however, a metaphor is all we get

But then what is network analysis?

A network is a structure of relationships among entities.  These entities, or nodes, are linked along edges, which represent some form of relationship.  You could, for instance, create a network of swine flu virus sufferers who were linked by passing the infection on or a network of friends on Facebook.  Network analysis graphs these relationships in order to perform a holistic analysis of the structure.  Here is one kind of network that existed within the Bloomsbury Group. 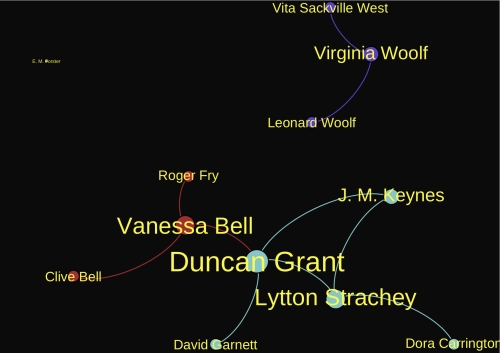 Can you guess what the connections are?  I have relied on a cursory survey of Internet sources for my data, and I’m sure that there are people  who are much more knowledgeable about the sexual life of Bloomsbury, so please let me know about my errors.  But how to read the graph?

Each colored dot, or node, on screen represents a person.  The nodes are connected by edges.  But you are seeing much more than just who is connected to whom.  I created this and all the graphs Mark and I are going to show you today by first creating a table containing all the nodes and then linking those nodes to each other using Gephi, which is a software program.  Gephi analyzes this data and looks for any structures that it contains.  One of the things it does is measure the modularity of the network, which is a fancy way of saying it looks for communities within the larger group. In this case, there are 4 modules, indicated by the color of the nodes.  Colors show communities.  The one you can’t see is off to the top left, where E. M. Forster sits.  Since he had sex with no one in this network, he’s his own community.  He’s very small, which tells us that he has little network authority. Network authority is a technical term, based on how many nodes are linked to and linked by a node.  So the more connections a node has, especially to nodes with lots of connections to other nodes, the greater its authority is, which is indicated by the size of the node and its label. In this example, Duncan Grant, who links the blue and red communities, has the greatest authority.  In addition to color and size, the node’s position in the graph tells us about its degree of connectedness or centrality, which involves not only the number of links it has to other nodes—what’s known as degree—but also how many edges it is away, on average, from any other node—what’s known as closeness, and how many of the shortest paths between any two nodes pass through a particular node–what’s known as betweenness.  Duncan Grant is at the center of this graph because he is a hub linking the red and blue communities; without him, the network would break up into two additional parts.

Sexual politics aside, this is a very simple network, with only 12 nodes and 10 edges.  What about when we look at one with 281 nodes and 4508 edges, like the graph of authors linked to each other by appearing in the same issue of The Freewoman? 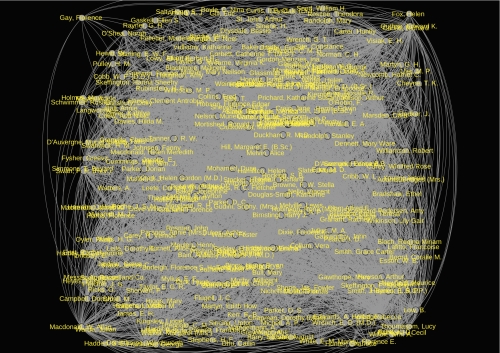 This graph is obviously unreadable, which is why I am showing it to you, so you can appreciate how network analysis discovers order within what seems like chaos. The graph was created by using contributor files Mark Gaipa made available through the MJP Lab to create a nodes table on Gephi, which I then linked using Gephi software (I’m happy to provide more details if there’s interest).  The edges or links in this network represent contributors who appeared together in the same issue; an edge constitutes co-appearance in an issue of a magazine.  So, if Pound appears in the same issue as H. D., he’s linked to her by a line.  But he’s also linked to everyone that he ever appeared alongside in an issue, which means that his node provides a way for authors who never appeared together but who appeared with Pound to be linked together.  Creating all the edges but not doing any analysis on them produces the mess above.

Then I used Gephi to analyze the network for modularity, authority, and centrality and produced this graph, which is a major step up in clarity. 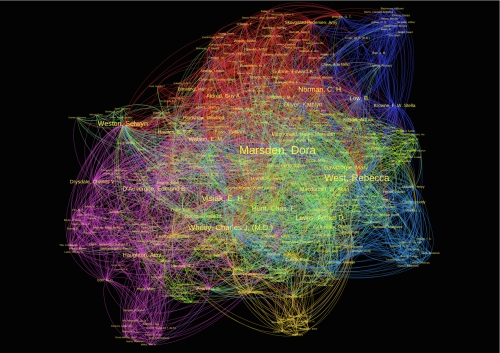 So, what can we see?  First, that this network is large.  That’s in part a function of The Freewoman’s being a weekly, so you’re looking at 47 issues, but it’s not just that.  Note the number of clusters around the edges of the graph—these are produced by the large number of contributors who were correspondents that published one letter in the magazine and never appeared again.  The Freewoman’s dedication to correspondence is the primary reason the graph is so large and that a modularity analysis discovered seven communities within the network. At the same time, the large green cluster at the center, where we find the 3 most authoritative nodes in the network—Dora Marsden, Rebecca West, and E. H. Visiak— suggests that there was a core of writers who were most likely to define the magazine for readers.  Marsden and West are relatively well-known quantities, but who among us can name some of E. H. Visiak’s major works?  It is in this sense that visualization can serve a mapping function, for it can help us determine where we still need to look in order to understand modernism.  One final thing to say here, despite it’s reputation for being much more political and much less literary than the subsequent Marsden magazines—a claim supported by Mark’s graphs—it’s worth noting that two of the three top contributors to The Freewoman —West and Visiak—were literary writers.

Not that there weren’t differences.

A quick glance at the graph of The New Freewoman (above) reveals a smaller graph, due, in part, to its having many fewer issues, but more important is the steep decline in the publication of correspondence and the total number of contributors.  What this results in is a much more cohesive network with only three communities.  The two largest modules are anchored by, respectively, Benjamin R. Tucker and Remy de Gourmont, with Marsden providing a bridge between the two.  Gourmont and Marsden, again, are not great surprises, but what about Tucker?  He was a prominent American anarchist, which might be unexpected in a magazine that has always been seen as more literary in bent than its predecessor, but Tucker was also a devotee of egoism who came to Marsden’s attention as Max Stirner’s translator.

Although I’m not ready to publish the graphs from a network analysis of The Egoist, I can offer up two preliminary findings.

First, Marsden remains prominent throughout the run.  In every year but 1916, Marsden remains among the 4 most central contributors to the magazine, this despite ceding the editorship to Harriet Weaver and contrary to the claim made by some critics that Pound pushed her to the periphery.  Pound ranks among the 5 most central figures in the Egoist network in only 2 of its 6 years; more prominent than he is Richard Aldington, a modernist who surely needs to be studied more if we are really to understand this period of literary history.

The second and more important point is that from The Freewoman to the last issue of The Egoist in 1919 we can see the author networks shrinking and mathematical analysis reveals that the paths between contributors grow progressively shorter, by which I mean the number of edges separating any two nodes from each other in the network decrease.  As these networks grow tighter and smaller, it becomes easier to link two authors together, which, it is my hypothesis, is how readers of early modernism figured out who to regard as part of the literary movement that would only later come to be known as modernism.  What we can see happening in The Egoist is network of modernism becoming both more exclusive and more redundant, in the sense that readers would see the same writers again and again paired with each other.  I think this is important because it adds a level of nuance to the influential accounts of modernism’s cultural economy made by Lawrence Rainey and Aaron Jaffe.  Rainey and Jaffe both argue, drawing heavily on a comment made by Pound in a letter to Eliot’s father, that modernism operated according to an economy of scarcity, in which writers increased their symbolic capital (at the expense, perhaps, of their financial capital) by publishing less and creating demand for their work.  Although this account looks true-ish for books, it’s not particularly convincing if we take magazines into account, since Eliot and Pound published a great deal in periodicals.  What network analysis of these magazines and work I’ve done elsewhere suggests is that the modernists did not practice scarcity so much as exclusivity, limiting themselves to a smaller network of writers than was typical for magazine production.  As The Egoist grew more literary, its network shrank, until by 1919, it wasn’t that much larger than the network of sexual connections in Bloomsbury.