Meet the Little Magazine Project (US)

Not to be confused with the Little Magazines Project in the UK, The Little Magazine Project is in a start-up phase at the University of Iowa, under the direction of James Elmborg, associate professor at the School of Library and Information Science at the University of Iowa.  It looks like it’s going to be dedicated to mimeographed poetry magazines from the 1960s.  There is some more information here and a short YouTube clip here.

I spent the day preparing Voyant Tools corpora for an in-class lab tomorrow. The following links lead to a chronological corpus of all 9 magazines currently offering TEI XML files in the MJPLab Sourceforge site. I also broke them down and offered individualized corpora by magazine to facilitate comparative analysis.

To make the datasets, I used a regular expression in TextWrangler to strip all the tags out of the XML files, and then used a command line script to batch rename them. The first attempt at the comprehensive corpus resulted in weird results on account of Voyant’s ordering the files alphabetically, so I manually renamed all 508 of them to place the publication date (yyyy-mm-dd) at the beginning of the naming convention to keep the representation of materials chronological. The individual magazine corpora are chronological on account of the volume and issue numbers having been part of the naming convention first used by Mark Gaipa.

The Rise and Fall of Duke Magazine 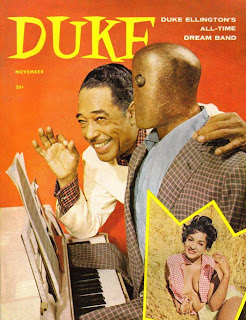 The latest issue of Book History includes an article on Duke, the short-lived men’s magazine for an African-American audience.   Here is the abstract for “Race, Respectability, and the Short Life of Duke Magazine” by Kinohi Nishikawa. END_OF_DOCUMENT_TOKEN_TO_BE_REPLACED

Robert Scholes, co-director of the Modernist Journals Project, has written a response to Senator Coburn, which I am pleased to provide here.

United States Senator Tom Coburn, of Oklahoma, recently released his annual report detailing what he perceives as wasteful federal spending. One of the examples he cites is the Modernist Journals Project.  Senator Coburn says that, in 2012, the Modernist Journals Project (MJP), a joint venture administered by Brown University and the University of Tulsa, was awarded $270,000 in federal funds from the National Endowment for the Humanities (NEH). The Senator is wrong about this. The NEH spent $132,000, and the universities of Tulsa and Brown spent $134,000 on this particular grant. The Senator also mentions other grants for the MJP over nine years, totaling a bit over $600,000 which he says came from NEH. But Tulsa and Brown also paid almost half of those funds as cost sharing. END_OF_DOCUMENT_TOKEN_TO_BE_REPLACED

In what must be the most surreal news of the week, perfectly timed to the MSA conference in Las Vegas, Senator Tom Coburn of Oklahoma has identified the Modernist Journals Project as #79 on his list of 100 items for the 2012 editionof his annual Wastebook, which, to quote the press release, END_OF_DOCUMENT_TOKEN_TO_BE_REPLACED

Posted on October 18, 2012 by pauloshea | Leave a comment
For those of you with $228.27 to spare, the new volume of the Oxford Critical and Cultural History of Modernist Magazines Vol 2: North America 1894-1960 has been published.  Table of Contents after the jump. END_OF_DOCUMENT_TOKEN_TO_BE_REPLACED