Nothing’s Shocking: The Importance of Digitized Newspapers and the Stupidity of Jonah Lehrer

Mag Mods tends to spend a lot of time on magazines, but it’s important to remember just how valuable a resource newspapers are for historical research into modernism (and, I guess, other stuff).  A couple of years ago, I was teaching a freshman seminar on taste.  We read a chapter out of Jonah Lehrer’s Proust Was a Neuroscientist one week, in which Lehrer basically argues that the reason there was a riot at the premiere of Le Sacre du printemps on May 29, 1913, was that the neurons of the brains of audience members could not process the music and, as a result, released large amounts of dopamine to quell their–the neurons’–anxiety, which ended up creating a kind of schizophrenic state in the audience.  In a nutshell, Lehrer’s argument was that Stravinsky’s modernist masterpiece literally drove the Paris audience mad.  For an audio version of this tale, complete with plenty of bullshit and errors, listen to it on Radiolab.

Lehrer, of course, was revealed this past year to be a bullshit journalist.  This seems to have been a big shock in some quarters, but anyone who read his past work, with its simplistic use of science to explain culture, with a modicum of skepticism would  have been ready for the revelations.  My freshman quickly picked up on the implausibility of his claims in the Stravinsky essay, and less than an hour of research in the digital archive of the London Times confirmed their skepticism.  Lehrer attributes the riot at the premier of the Rite to the formal qualities of the music.  If he’s right, then the music should have the same effect on any audience unprepared to listen to it.  However, as I discuss in a recent piece, the London premiere of Le Sacre went off with virtually no disturbance.  This was an audience who could not have been prepared for the performance by recordings, and yet, their neurons dwelt with the piece just fine.

So, what’s this have to do with newspapers?  If Lehrer and the many other critics who have celebrated the 100th anniversary of The Rite of Spring by nostalgically lamenting the glory days of modernism, when art could still shock, if they had just done a quick search of newspapers, they would have realized that the riot was basically a manufactured event, driven more by cultural and social tensions as well as marketing than by the so-called difficulty of Le Sacre. 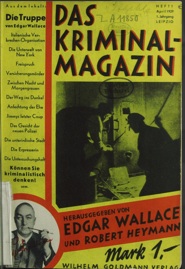 Really exciting news here.  There’s a new site specializing in digitized versions of German magazines from the 1st half of the 20th century.  Here’s the description Illustrierte Presse provides on its site.

Illustrated magazines from the era of Classic Modernism are a rich and esthetically top-rate source for the history of the period between the wars with regard to everyday life, culture, communication, design and photography. Our website offers the complete inventories of “Querschnitt”, “UHU”, “Kriminal-Magazin”, “Jüdische Magazin” and “Auto-Magazin”, soon to be joined by five more titles.  Ten of the most important German-language magazines of the period with roughly 650 issues, with 75,000 printed pages and more than 50,000 illustrations have for the first time been compiled virtually and made available to both researchers as well as to readers interested in cultural history.

Burlington Magazine News: When More Ads Are a Good Thing

In the world of digitized magazines, ads are a good thing.  Scholes and Wulfman make a persuasive argument in Modernism in the Magazines that advertisements represent an important part of our  heritage.  That’s why it’s such good news to hear from Barbara Pezzini, Project Manager at the Burlington Magazine Online Index, that they’ve just received a grant to catalog their ads.  The announcement is below.

The Monument Trust has just granted The Burlington Magazine their generous financial support to catalogue digitally all past and present advertisements 1903-2013, which will be freely available through the Burlington Index Website.

As you know, the advertisements placed by art dealers in The Burlington Magazine since 1903 (a data bank of circa 90,000 images) are an unexplored source for the  study of the art market and its contribution to art history. They  supplement directories to reveal the locations of galleries and are an essential tool for mapping the expansion of the commercial art world during the twentieth century. They also include photographs, providing visual evidence of stock held by dealers. Finally, and most importantly, these images provide important evidence of untraced works of art and their whereabouts at a given moment: the  digitisation of these resources will greatly aid provenance research.

The cataloguing of the dealers’ advertisements and their images is a significant scholarly project that will contribute much to our knowledge of the twentieth-century art market and will make accessible much information which currently is unavailable.